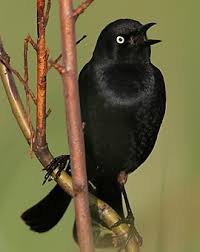 Three wonderful writers sent in poems–two after one of Stevens’s most popular and most influential poems, “Thirteen Ways of Looking a Blackbird” In alphabetical order: Tiff Holland, W.F. Lantry, and William Walsh

13 Ways of Looking at a Buzzard

I
Black bird that is not a blackbird:
blackbird, grackle crow .raven.
These are the black birds.

II
The tree was dead
and empty.
My mind was empty.

IV
The dog sniffs the fence line.
The dog watches the buzzards.
I watch the dog
the dog and the buzzards and I are one.

V
I prefer the silence of buzzards.
The crows caw, the grackles heckle
the ravens are unknown to me.
I understand the buzzards.

VII
In Texas the buzzards are raptors,
scavengers, vultures and cousins:
American, turkey.
The hawks are excluded,
true birds of prey.

IX
They disappear, sometimes for days
they fly alone, in flocks, in clutches.
What is the multiplicity of the buzzards?

XI
They fly into Hinkley Ohio each spring.
I am from near Hinkley,
have rappelled the boulders,
watched the air,
but these buzzards stay here. It is
winter, but they stay in spring, too.
They hunch their shoulders.
They are complete in stillness.

XII
The clouds have boundaries here.
The creek is dry.
The round rock sits like a top in the river.
Still ,things die on the Chisholm trail,
along the highway.
Still the buzzards eat.

XIII
I measure the day by the shadows on the fence,
the flight of the buzzards,
their uneasy rest.
There are cedar trees to the east,
live oak.
The buzzards choose to roost in the sun,
death eaters in the open fist of death.

Tiff Holland writes poetry, fiction and nonfiction. Her work has appeared in dozens of litmags, ezines and anthologies and her poetry chapbook Bone In a Tin Funnel is available directly from Tiff or through Pudding House Press. Her work has twice been nominated for the Pushcart Prize.

“what are the holy cities of America?”
~Berryman

There are no blackbirds on the Stevens walk.
We circle, looking for a seemly place
to park, and try The Hartford’s spacious lot.
The young attendant greets us, but he’s got
no notion who the poet was. His face
is buoyant with new generosity:

parking’s on him. Our curiosity
drives us to find the rough commencement stone
set in this lawn along Asylum Road.
She reads, and I explain to James the code
engraved into the polished face. He’s known
as a good finder, and he spots the next

just north. The devotees of Malcolm X
are handing out their Final Call, and stare
as I explain the third. A river birch
papers its bark before the red doored church.
I love the fifth. Its sounds, in empty air,
presage our storm. We cross the Brahmin stream

to gated lions, once held in esteem
but fallen now, twisted by wind and snow:
the mansions have been sold. White faces peer
from windows, dialing. Silly, I revere
the last. A squad car watches as we go
towards the park, along the cedared block.

W.F. Lantry, a native of San Diego, won the CutBank 2010 Patricia Goedicke Prize and the 2010 Lindberg Foundation International Poetry for Peace Prize in Israel. His work has appeared in Gulf Coast, Prairie Fire, Literal Latté, Cha: An Asian Literary Journal, Now Culture and The Wallace Stevens Journal. He currently works in Washington, DC. and is a contributing editor of Umbrella: A Journal of Poetry and Kindred Prose.

Outliving your mister
by one hundred years
and counting is not wifely,
Mrs. Wallace Stevens.

No somatic memory of the poet
or the policy or the note
from the bank addressed
to Mrs. Wallace Stevens.

Your fear of R2D2 is not so charming
after all these years, the blips and
bleeps translate to this: Take a letter,
Mrs. Wallace Stevens.

Mrs. Wallace Stevens overheard
saying to the girl poet in the hall:
You do look like a pool. You do,
you do, you do.

Letting Hemingway kick his ass for you, nearly
forgotten now. And Mrs. Wallace Stevens posing
for that picture with the fattest cat on the porch.

The built-up shoes, the trick knees,
the canoe floating above the head of
Mrs. Wallace Stevens, who pretends to carry
her share of the load in shallow waters.

The tennis racket, the butterfly net, the flyswatter.
Apt metaphors for Mrs. Wallace Stevens. And a dry
erase marker resting on a stepstool.

From the Archives: Soft Eclipse, by Elizabeth Robinson

(Trans)Forms as Philosophy, by Lance Olsen

It’s Giving Tuesday: Will You Support Big Other?