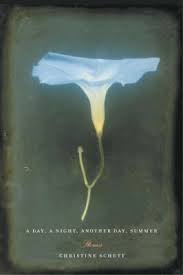 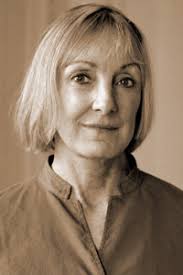 Last Thursday I saw Christine Schutt read her story ‘The Blood Jet’ at the Housing Works Bookstore in Manhattan. I’ve been to over one-hundred readings by fiction writers but this was the most moving. It wasn’t that she performed it so much as she channeled it. But of course what better reader was there? Schutt had worked over those words, those sentences, those movements–she’d created it out of air. Once there had been a blank page and then there was ‘The Blood Jet.’ It’s an angry piece, people treat each other like slop, but the female narrator admits her wrongdoings as well, her naivete. Schutt busted out this murky tune like Coltrane spilling ‘Dear Old Stockholm’ on his eponymous album. She’d didn’t waver at all, the sentences spun, the inflections rose and sank and we were left mesmerized. I started to watch people in the audience. They weren’t moving, they weren’t coughing. The record for the least number of text messages sent during a reading fell.

The reading was filmed and I pray Harper’s will release it at some point. In the interim, here is Schutt reading the beginning of her novel Florida:

‘The Blood Jet’ is from the story collection A Day, a Night, Another Day, Summer, a collection Gary Lutz swears by (“…she’s the writer I most admire”). I recently spoke to two people about contemporary fiction and neither of them knew about Christine Schutt, something I immediately rectified as I had been carrying her short story collection with me since the reading. I opened the book up for one and told them to read the last sentence of ‘The Blood Jet’ to get a taste.

I wonder at that tin-bright vision, that acidic bite of spit, that embrace, that poetry by which I live.

I murmured about bright/bite and acidic/spit, that sweet music–they shook their head. Writing about Amy Hempel a few weeks ago, I said, “the sentences of the story anticipate the story itself. The music of the sentences… stand alone as music and for a moment the story can be put on hold–each sentence, all alone, is the story.” That’s no less true here.

The morning after the reading, I examined parts of ‘The Blood Jet’ and soon began writing a few pages of my own. Schutt and her words had touched something, had pushed just enough that I fell into my own trance.

Schutt’s Bookworm Interview about the collection.

4 thoughts on “Bite of Schutt”

George Orwell on Liberty, Language, the Imagination, and More

Announcing the Winners of the 2021 Big Other Book Awards!

Salman Rushdie on Language, Literature, Freedom of Expression, and More