When the concept of evil has been dissected, it’s traditionally been under the supple lenses of art and religion rather than science. A rare exception is Lyall Watson’s Dark Nature, which deploys the tools of anthropology, evolutionary biology, even astrophysics, leaving no stone, earthbound or otherwise, unturned.  Naturally, one notion that comes up is that of the sunnum bonum, the “just right,” i.e., the Goldilocks principle. Evil, in this view, is disharmony, the harmless or benign done to excess.  Indeed, Watson points out that “evil” derives from the Teutonic “ubilez,” “up or over.” Watson also suggests that what we call evil and what we deem good might exist in a sort of an uneasy tension, a push-pull analogous to how forces in the universe interact—think about protons and electrons and their charges, or the way in which gravity and inertial velocity keep the very planets in their orbits. As far as we know, on only one of these planets does evil exist. Yet Watson muses on whether a black hole, the epitome of destruction smack dab in the heart of a galaxy, might be the cosmic analogue of evil.  This sounds a bit like modern-day, astrophysically-enhanced mythmaking, but on the whole surely reflects something of our palpable intuition that evil is something we contain only through struggle, through suppression or repression, the deterrence of law or shame, the viral media being our latter-day scaffolds. If the archetypal devil and angel squabbling at the shoulders, in ceaseless tangle for our souls, sounds too Sunday Schoolish, switch out limbic impulses for the devil and a highly-activated frontal lobe for the angels; the tension, regardless of the language into which it is translated, persists.

In Bradford Morrow’s striking debut collection of short stories, The Uninnocent, released late last year, one can see both of these in action; in many cases, it is characters’ excesses, their going “up and over”—obsessive hoarding, fear, revenge fantasy, greed, or simply being soused 24/7—that hurtle them into their tailspins, equally likely to result in their self-destruction as that of a nemesis. But what, one might rightly inquire, provides the countervailing force, the gravity that keeps these stories from collapsing into black holes devoid of hope or redemption?

Amidst the dark matter float the shimmers of empathy and sensitivity, along with the luminescent prose itself. Throughout, we see innocence and its antitheses, knowledge and transgression, yoked together like a novice parachuter and instructor, their fates and limbs intertwined in their hurtle earthward. While these characters may lie, cheat, frame, drink themselves into oblivion, and occasionally even send those around them to early graves, one steps back to behold a chiaroscurist beauty, Rembrandts of the psyche rather than those that trace only outward features.

But I’d be mis(lead)ing you—to cite the title of one of the funnier, wilder stories—if I led you to think that these stories distance us. Rather, Morrow is a precise ventriloquist of consciousness’s innermost voices, its denials and dodges, its rationalizations and flickers of rationality, attuned to the way in which every innocent person may be alike, but every uninnocent is uninnocent in his or her own way. Or, more accurately, there’s no such thing as an innocent person, and if there is, blink and that vestigial innocence, or the person him or herself, is gone. Those who begin that way, like the blind protagonist of “Amazing Grace,” or like the mentally-challenged Desmond in “Whom No Hate Stirs None Dances,” get torn apart as quickly and consummately as a fresh kill that lies in a carnivore’s path.

“The Hoarder,” the story that opens the collection, fittingly serves as an exemplary figure for the book as a whole. Like many of Morrow’s protagonists, on one level its titular character evinces a certain self-awareness, declaring his hoardership from the starter’s pistol and then tracing the habit from the “whelks and cockles” of childhood through to the stockpiling of words and insults—“festering pustule” and “pachyderm anus”—which he flings at his brother, lifelong antagonist. If our impressions of hoarders these days have largely been shaped by the tv show, Morrow’s version of same surprises and disarms. This hoarder seems more a connoisseur of the elemental things of the world, “gestures, voices, the various flavors of nascent sexuality,” rather than a compulsive at the fringes; one is tempted to say he might have become a scientist—or a writer of Nabokovian, detail-caressing temperament—had a cross-breeze caused a Pollyomatus blue to flap its wings otherwise in some tropical region. Like many of the stories here, the piece is inflected with noirish qualities, but stands apart from the genre’s standards through its formidable range and specificity of allusion. One might go so far as to call Morrow a hoarder of allusions, from botanical terms to international events, from “pink squirrels, kamikazes, grasshoppers, [and] Singapore slings” to Sviatoslav Richter’s performance of Schubert, from the names of archeological luminaries to the details surrounding Orson Welles’s “War of the Worlds” broadcast. We learn in “Lush” that “ivy was a preventative for drunkenness and the best cure for a hangover,” and when its narrator appends this thought with “It’s in Pliny, trust me,” we do. But Morrow’s hoarding is surely no stockpiling, for the allusions are dispensed freely to the reader, liberally but purposefully strewn throughout these stories, lush indeed.

Morrow’s ability to inhabit vivid, memorable voices is particularly evident in “Amazing Grace” and “All the Things that Are Wrong with Me.” The first of these puts us in the head of a motivational speaker who, as we learn in the opening lines, has been blind and has had his sight restored suddenly. The narrator reintroduces us into the disheartening truths of his life gradually, in stark contrast to the suddenness of his vision’s return; seeing may be believing, but what he sees verges on the unbelievable. The character’s voice is a mashup of the Biblical platitudes that sustained him during his years of darkness, (“ Jesus cured in Jericho”), the tepid clichés you’d expect to find on the tongue of a motivational speaker (“Don’t be afraid of miracles,”), and the fresh language of one who has been lightning-struck with the poet’s gift and obligation of seeing the world anew (“Though elegant and drily beautiful, her face was as if invaded by knives—angular, hewn, deblooded.”). His life undistorted by niceties for the first time, the narrator’s world is rendered new; slight exaggeration only to say he was born yesterday.  His outward situation may be a reversal of Oedipus’s, but his coming uninnocent is comparably agonizing, and if there is a god here, He may very well be a “sadistic Bastard.”

“All the Things That Are Wrong with Me” is framed as mock-therapy, beginning, “As you know, we were each told to write an honest essay about the things that are wrong with us, and this one is mine.” Again, self-knowledge is put to the test, and Morrow seems to be suggesting that it gets us, if not quite nowhere, then by no means very far along. The more the character enumerates his misdeeds, the more we can see that he no more deems them that than does Hamlet’s Claudius as he is rolling his eyes heavenward. Yet this character, still reeling from a taxidermy trauma, turns into a vigilante St. Francis. Did I mention that it is quite funny?

Morrow plays with point of view, ranging from the internal monologue to the dual first-person, the latter of which is rarely attempted, much less pulled off successfully, in short fiction. In “In Whom No Hate Stirs, None Dances,” the point of view dances between perspectives, in a critical moment, thrusting us into the thought-tumult of the reprehensible Cutts. When his wife and sister partake of an Amontillado as he is banging around in the attic, it is impossible not to think of Poe’s story. Here, we get to straddle the wall behind which the Amontillado stash is kept, to experience both the terror and glee of revenge as mortar is slathered between the bricks.

The most unusual use of point of view is that of “Mis(laid),” which invents a perspective that manages to be simultaneously distant and close. One might describe the main character as parenthectomized, the mis(laying) of his mind refracted in the continual slicing and dicing of the narrative by parenthetical specifications, emendations, second-guesses and revisions. Morrow writes, “Where once he was sociable (neighbors often invited him to dinners, during which he told hilarious familiar jokes and never failed to help clear dishes) and affectionate (his longtime girlfriend, while married to one of these very neighbors, was as devoted to him as a mother of three children could manage to be), now he was isolated, bitter.” What Padgett Powell did for the question mark in The Interrogative Mood, showing off its utility and versatility by taking it off the leash, Morrow does for the parenthesis. The result, as with Powell’s work, is that we thought we knew what question marks (and parentheses) do (and did), what their functions are, but now are left wondering, our own internal duality (an undertow of consciousness, you might say) put into relief (phew!). The story hinges in part on the protagonist’s mental breakdown, but equally on the media’s coverage of the hostage crisis he precipitates, a sharp reminder of how such coverage runs a steady ticker across our screens like some non-stop parenthesis gone amok.

The closing story, “Lush,” is markedly villain-free, though ample alcohol flows through the story to sink a catboat and then some. If self-consciousness and knowledge mark the irrevocable fall from Eden, then the simple forgetting that alcohol promises can seem anodyne, until it turns into oblivion. In “Lush,” two of the main characters, James Chatham and his wife Margot, are heavy drinkers, the latter killed when intoxicated at the wheel. The story bears us through the Bay of Fundy-like tides of their besotted lives. Yet in a moment that could speak for the book as a whole, Ivy, who collided with Margot and survived, reminds us that, “We don’t love people because they’re perfect.”  “Lush” raises its many glasses to the scabbed and scarred, humans forced to reckon with the ironclad laws of physics and consequence, though it’s hard to say whether the angels or devils get the last word.

Knowledge and sin have been close siblings, twins or nearly so, for at least a couple of thousand years, and the image of Eve imparting the apple to Adam on the book’s cover reminds us of this lineage. More, the epistemological fluidity in these stories, coupled with Morrow’s gift for ushering us into their minds, implicates the reader in what these characters know, and what they don’t know but sometimes should that the reader can readily infer. At times we are Adam, at others Eve, sometimes Cain, sometimes Abel, and on occasion we may wince upon glimpsing our serpentine reflections within.  In short, the uninnocent are effectively us, not because of original sin but because we enter into each story unsure as to where the darkness will come from and at what angle its shadowline will fall on us, only certain that it will. 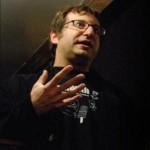