What kinds of things do you take into consideration when preparing for a reading / performance, especially when there has been no specific prompt? Do you factor in audience? Do you prepare multiple sets and gauge the room in real time before choosing, let’s say, slightly humorous over more serious work? Do you favor brand new writing over material that’s a bit more “tested”?

I read aloud while I’m writing, more or less constantly (I’m reading this aloud now), so my voice seems to be a part of the thing already. That’s my preparation. I already have a pretty good idea of what “sounds good,” at least to me, just from the process of writing it.

Though I have noticed that scene-based stuff (things with “characters” and “dialogue,” you know) usually works best in a performance setting (seems kind of natural, given that it’s what we expect to see on stage — scene), I don’t really use scene in my work very often/ever, so I try to find something that makes sense as speech. I’ve read guided tours, depositions, introductions, lectures, reports… if it wouldn’t be natural for someone to be reading it aloud, I don’t usually choose it.

Otherwise, it seems a little like an endurance test: “Hi everybody, here’s something I meant for you to read, silently, to yourself, but instead I’m going to read it aloud to you.” Is it humorous? I don’t know. Sometimes people laugh. It’s happened. 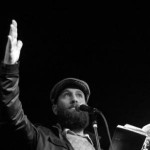