The Robert Bresson Retrospective is at the Film Forum right now. But it is going to other venues in the US and Canada as well: The Bresson retrospective opens this week at Film Forum in New York; Jan. 19 at the Pacific Film Archive in Berkeley, Calif.; Jan. 20 at the Harvard Film Archive in Cambridge, Mass.; Jan. 21 at the Gene Siskel Film Center in Chicago; Jan. 31 at Bard College in Annandale-on-Hudson, N.Y.; Feb. 9 at the TIFF Cinematheque in Toronto; March 1 at the Los Angeles County Museum of Art; March 3 at the Cleveland Cinematheque and the National Gallery of Art in Washington, D.C.; March 6 at the George Eastman House in Rochester, N.Y.; March 9 at the Belcourt Theatre in Nashville; April 4 at the Pacific Cinémathèque in Vancouver, Canada; April 13 at BAM in Brooklyn, N.Y.; May 1 at Northwest Film Forum in Seattle; and May 10 at the American Cinematheque in Los Angeles. (Further venues and dates may follow.) 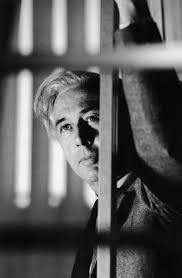 Bresson is one of the most enigmatic filmmakers. Little is known of his early life, but he was a POW in WWII, possibly accounting for his so called trilogy of films about men in figurative and literal prisons (Diary of a Country Priest, A Man Escaped, and Pickpocket). To give a sense of perspective, Bresson was older than Samuel Beckett. Early in life he pursued painting. He didn’t produce a significant film until he was 45 years old. But let us have a treat and let the man himself tell you about his methods. Here is a startling interview from a French TV show. Two “intellectuals” sit facing Bresson in full interrogation manner, puckering their lips, digging and trolling to break down perhaps the most “Zen” filmmaker outside of Japan:

What an ending! My favorite of their questions is, “Your film is quite unlike others. Are you aware of that?” He replies, “No, not at all.” This and Bresson’s insistence on wanting to express a feeling are the keys to appreciating Bresson. No message but feeling only. (My review of Bresson’s Notes on the Cinematographer)

Bresson’s images are less stately than say Tarkovsky’s or Kubrick’s, but no less potent. He considered actors “models,” and pretty much only used non-actors, and only once. He thought when the people saw themselves on film they would start making corrections. He favored a roving camera in many of his celebrated films following the actors (his later films often follow the actors legs and feet as they walk, especially in L’Argent) or what I’m come to think is the most celebrated character/performer in cinematic history, the donkey Balthazar. Here is the beginning of Au Hasard Balthazar (Watch out, Balthazar) from 1966:

From my article on Bresson at the Rumpus:

This sequence, until the crack of the whip, is so easygoing and childlike, it’s hard to imagine an old man created it. This is Bresson’s magic. A simple showing. There is no ostentatious editing (dissolves dominate the entire film), the camera movements are slow with mostly medium and close-up shots of the characters, though the long shot of the school and people walking toward the camera is a motif Bresson returns to throughout, a cleansing of the visual palette if you will. Bresson blends in some of the main characters in cast during the opening, including Jacques, Marie and her father. He also throws in a sick child who won’t appear again in the film. Her covering her face in agony of not being able to fit in takes about five seconds of real time but everything one needs to know about the situation is shown — Bresson creating multiple worlds.

It seems the purpose of this sequence is not only to show the innocence of Balthazar, but also that of human beings. Children play and happily push each other in swings — life is sweet. The rest of the film is not.

Another great interview. This one is about L’Argent: