Last time, I explored Plato’s theory of art; this time, I’d like to focus on Aristotle, particularly the Poetics, and see how Aristotle’s thought lines up with that of his former teacher Plato.

Plato has a tendency towards universalization that comes up again in the likes of Kant and Hegel; Aristotle tends to approach things each on its own terms, to keep the particulars particular. Whereas for Plato the question of poetry and mimesis could not be discussed outside of the larger questions of Truth and the Forms, for Aristotle poetry is just another topic, connected to some things and not to others.

He was, by most accounts, not nearly the stylist that Plato was; words like “able” and “passable” tend to come up when discussing Aristotle’s literary efforts (the introduction to my translation of the Poetics, something of an outlier, refers to the “graceful, at times impressive style” of his now-mostly-lost dialogues, which still seems like faint praise).

It’s possible that the fact that Aristotle was not quite so passionately attached to poetry as Plato gave him the distance to be able to see it more clearly, or at least more “scientifically.”

Throughout the Poetics, Aristotle is engaged in a sort of reverse-engineering of tragedy,* choosing those works that have been identified, by common agreement, as the most successful examples of the form, and then, like the good scientist he is, taking them apart, and trying to figure out how they work. He’s not interested in prescribing what good literature is, at least not as anything external to literature itself; at the beginning of the Poetics he lists “artistic success” among the topics to be discussed, but it is interesting as one of the various phenomena associated with tragedy. Unlike Plato, for Aristotle there’s no higher standard, external to art, that art must conform to.

The concept in the Poetics that has had arguably the most influence on the theory of art is that of catharsis.

The word catharsis actually only comes up once in the text of the Poetics, in section 9, and it seems that we’re not all that sure of what Aristotle meant by the term. It’s often identified with “the effect proper to tragedy,” mentioned elsewhere in the Poetics (“for one should not seek any and every pleasure from tragedy, but the one that is appropriate to it,” from section 14, trans Gerald F. Else), but there’s nothing in the text itself that makes this connection clear. Aristotle is insistent that the emotional effect on the audience should be “fear and pity,” but the connection between fear & pity and catharsis is never explained—nor, for that matter, does Aristotle ever get around to defining what he means by “catharsis.”**

Regardless of what Aristotle meant by this term, the reading of catharsis that influenced future artists and theories of art is “a spontaneous overflow of feeling,” a mass emotional release that is supposed to occur somewhere around the climax of a tragedy. More generally this becomes an emotional release caused, in some way, by a work of art. The idea is that art channels and releases various negative or otherwise potentially overwhelming emotions, and leaves us free to continue our lives as good citizens.

Art, in this view, is a machine for creating emotional release.***

We now have two possible models of art, corresponding to two possibilities for artistic value. If we follow Plato in accepting truth as the highest value, of art as well as everything else, then the best art is educational (or propagandistic: convincing via untruths for the benefit of a higher truth). There are two possible versions of this: either art is a way of prettifying information that could be transmitted in other forms, or else art in some sense teaches us things that we cannot learn through non-artistic means.

Aristotle, on the other hand, leaves aside the question of truth w/r/t art, and asks instead how art can benefit us. The model in this case is therapeutic. The best art is that which has the most beneficial effect; if we’re of a particularly scientific bent, it might occur to us to set up some double-blind studies, to see whether Jasper Johns lowers overall stress levels more than Norman Rockwell, & how both of them stack up against some placebo-painting.

Both of these theories of art are alive and well nowadays, of course: Alain Badiou, in his Handbook of Inaesthetics (from which I quoted earlier in a footnote, and which I hope to treat in more detail later on), notes that these theories have been reinscribed in the modern art-ideologies of Marxism (art as education) and psychoanalysis (art as therapy).

*He talks some about the epic, too, and devotes maybe a page to comedies, but the focus for most of the Poetics is on tragedy. This isn’t because Aristotle wasn’t interested in these other forms. There’s a rumored lost book on comedy, that plays the role of McGuffin in Umberto Eco’s novel The Name of the Rose; there was also a (probably much more extensive) dialogue by Aristotle, On Poets, also lost.

**Else speculates that catharsis might be connected with Greek concepts of “blood pollution,” stemming from acts of violence against relatives—if this is so, catharsis would seem to share a general structure with Girard’s concept of the scapegoat, with Greek tragedy functioning as a form of staged ritual sacrifice.

***Throughout this post, I keep wanting to quote from Alain Badiou’s reading of Aristotle. I’ll limit myself here to noting that Badiou refers to Aristotle’s theory of catharsis as a means of “dehysterisizing” art, a word that does a wonderful job of implying the sort of danger that both of these theories recognize in the unmediated, untheorized experience of art. 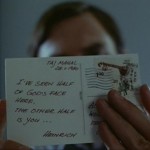 1 thought on “The Kind of Machine That Tragedy Is”