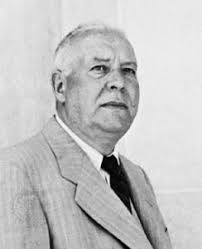 “The mind is the great poem of winter”: My Thoughts This Morning On Wallace Stevens
by Christopher Higgs

I know not with what or where to begin making words on or about Wallace Stevens. Everywhere birds, everywhere Cartesian grappling.  What is real, how does one see, could there be a more Modern poet?  A poet of epistemology.  Pure epistemology.  Of questioning, wait.  Could there be a more questioning poet?  A poet of wait.  So many soldiers and landscapes and the tyranny of to be verbs everywhere!

It is possible that to seem—it is to be,
As the sun is something seeming and it is.

The sun is an example. What it seems
It is and in such seeming all things are

(the opening lines of “Description Without A Place”)

Ways of seeing, ways of perceiving, ways of experiencing, ways of wrestling with reality and simulacra.  What is this, what is that, what am I, how am I, what is true?  What business is it of the poet to query Truth?  Stick to the Beautiful, I say.  But Stevens says otherwise.  Stevens says “There is no beautiful eye / And no true tree” (from “Analysis of a Theme”).  He desires both things simultaneously: he desires collapsed categorical distinctions.  His lineage is Whitmanian, he is large, he contains multitudes.  He also carries the torch of Emerson, who held the love of immanence close.  Yes, paradox befits Stevens.  He wears paradox the way Eliot wears pretentiousness: so casually, so fluidly, so incorrigibly.

Speaking of Eliot, Harold Bloom tells us that the ‘X’ in Stevens’s poem “The Creations of Sound” is meant to signify Eliot.  Bloom quotes the following passage:

Tell X that speech is not dirty silence
Clarified.  It is silence made still dirtier.
It is more than an imitation for the ear.

He lacks this venerable complication.
His poems are not of the second part of life.
They do not make the visible a little hard

“Stevens here ventures the crucial formula for American Romantic Poetry…: it must make the visible a little hard to see” (from page 152 of Bloom’s book Wallace Stevens: The Poems of Our Climate).  We have heard versions of this before: take the axe to the frozen lake, make it new, defamiliarize it, look askance, see with a crooked eye, yadda yadda; and perhaps the fact that there are versions helps to lend the idea credence with regard to Stevens, that master of obsessive variation.  Or, for Bloom, Stevens the Romantic.  But there is a distinction to be made.  Stevens does not ask the poet to see differently.  He asks the poet to make muddy.  To purposefully distort.

But what do we make of this willful obscurantism?  Willful difficulty?  Poets should not attempt to make the world more clear; on the contrary, poets should make the world less clear.  Clarity is the enemy of the poet.  Why?  Well, for me this is the whole reason one endeavors to construct literature: to complicate, to obfuscate, to make additions to reality rather than attempt to re-present reality or interpret reality.  Stevens did nothing for the interpretation of reality; he did everything for the creation of reality.  The interrogation of reality?  What am I saying?  Was Stevens not a Modern poet?  Was Stevens a postmodern poet?  Was Stevens a poet of ontology?  I cannot know what it means to exist in this world.  What world?  Which world?  The switch between these questions flickers back and forth, which is which, which is first, which is primary, which comes before which?  Could there be two of everything?  Could Wallace Stevens be the poet of quantum mechanical imagination, or the scribe of parallel universes, or the marionette of poetic string theory?  Perhaps now I have been watching too many back-to-back episodes of Fringe.  What would Wallace Stevens think of the television program Fringe?  It’s a funny thought: picturing Wallace Stevens eating fried chicken on the couch drinking Dr. Pepper watching season two of Fringe.

Imagination.  The imagining man.  What does the “buxom eye” see?  And how does the body matter to the mind or the mind matter to the body? “The senses paint / By metaphor.  The juice was fragranter / than wettest cinnamon” (from “Poem Written At Morning”).  How does reality matter to words and how do words matter to reality?  “Words add to the senses.  The words for the dazzle/of mica, the dithering of grass (from “Variations on a Summer Day”).

Announcing the Deadline and Guidelines for the 2022 Big Other Book Awards!