Something about Adam’s “Brevity, Part 1” of two days ago, which serves up Duras’s The Malady of Death, and Ryan’s punky post of yesterday has me thinking about things diseased, broken, and, ironically, totally fresh. Probably this is all related to the hunk of cancerous flesh a petite doctor took out of my arm this morning. But I digress.

I’ve got in my nimble fingers but have barely begun to read Ann Finger’s story collection, Call Me Ahab, winner of Prairie Schooner Book Prize in Fiction out of U of Nebraska Press. It’s a collection filled with a new vision of “disability.” Finger herself knows a little something about this, as she contracted (strange word this, no?) polio as a child just a few months before Salk’s vaccine became widely available. Her life-altering  condition may be pharmakon indeed–for her and us.

The stories here envision literary figures and characters we may have met but never really knew–Helen Keller and Frida Kahlo (in the first story, which I’m loving), and Vincent Van Gogh, Goliath, Ahab, more (I’ve not yet met any of these fellas, but based on the first story’s setup and style, I’ll get to them).

But Helen and Frida. They’re sexy, feisty, knowing. Strange that I find them so utterly surprising this way. Shame on me. These are not freaks or pitiable creatures lingering, as Finger writes, “on the border between death and cure (the only two acceptable states).”

And so, before I sink deep into Finger’s very able pages, I try to call up all the broken, bent, diseased main characters of stories past. Characters–more: people–I’ve loved but whom I’ve never reassembled off the page, never (re)envisioned fully or wholly. Until now.

Here are just a few (and, please, add your own here!): Keyes’s Charlie of Charlie, Steinbeck’s Lennie of Of Mice and Men, Bronte’s Rochester of Jane Eyre (who can’t actually count because he’s an overt stud throughout the novel and only in the end becomes maimed and blinded), and James Kelman’s blinded Sammy of How Late It Was How Late (but I’m thinking he may not count because it’s by his own stupidity he’s blinded at the book’s outset).

Then again, Kelman’s How Late… took the 1994 Man Booker Prize in a flurry of controversy. It was called “crap” by one of the year’s judges, Rabbi Julia Neuberger. And The Times columnist Simon Jenkins called the award “literary vandalism.” I recall Kelman countering the criticism in his acceptance speech, saying, “A fine line can exist between elitism and racism. On matters concerning language and culture, the distinction can sometimes cease to exist altogether.” At the time that was heady enough stuff for me. I was blind then to how blindness worked in and throughout the book. Sure, I understood that Kelman used it as a metaphor: Sammy is unaware and frightened of all facets of life that make it valuable or worth living. Not to stress the point overmuch, here’s one line wherein Sammy shows rather unequivocally where blindness puts him: “lonely, just fucking lonely, lonely, lonely, fucking lonely, lonely; that was his life, lonely” (61).

The beauty of reenvisioning the work right this second, thanks to the power and reality and complexity of Finger’s topic (and we’re not even talking yet about the stories or writing outright), is that I realize (real eyes?) it’s Sammy’s blindness that allows him to open his vision–and ours–so we see, literally, all that we, in our mighty ocularity, are missing.

That’s something I’d bet the late great Flannery O’Connor, or V.C. Andrews–and Anne Finger herself could be proud of.

Can’t wait to meet the rest of her mind-bending, perspective-shifting lame-os. 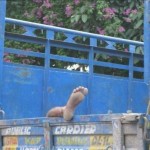