[Alexander Theroux’s essay “Theroux Metaphrastes” was published as an appendix to David R. Godine’s 1975 edition of Theroux’s 1972 novel, Three Wogs. It would be obtuse for me to attempt a capsule summary of a defense of expansiveness, and so I hope that the present superfluity will instead be taken as the advertisement for the essay itself it is intended to be; seek it out, I exhort you.]

“Eschew surplusage,” snapped Twain, that anti-European, anti-Catholic pinchfist from the American Midwest, with his unlovely spray of scentless botanicals. Blink the incidentals! Fract that chicken! Scumble that depth-of-field! Rip off that wainscoting! Slubber that gloss! Steam down those frills!

Ah, but these, you see, are not the cries of people with lexical gifts and the leisure, the languor, necessary to art. The artist, in fact, unlike Pushkin’s gambler, must be ready to sacrifice the necessary in the hope of acquiring the superfluous. The periphrastic Mr. Micawber is not funny, ha-ha, to me. Like me, he’s a throwback. He’s a thirteenth century schoolmaster, lessoned well in Dionysius Thrax’s Techne Grammatike, a fatty fellow shaking out poems and encyclopediana at every turn, flung, as he was, into a society of aphasiates, monoglots, and verbal slugs, each locked into the crochets of his bankrupt vocabulary and isolated on the Mt. Hecklebirg of his head.

It’s an aesthetic often demonized: “’Acquiring the superfluous?’—humbug! Mr. Theroux: we have no time for the superfluous; give us the facts. Quickly! Quickly! The five Ws (and the one H), please.” At the risk of being labeled a Luddite, isn’t that the same bill of goods that the technophiles have sold us? “Timesaving” devices (this one) that demand their own time (more of it than they save). Wouldn’t you rather read one beautifully-wrought sentence than ten instruction manuals? Why, then, sacrifice the superfluous for clarity? To make it easier for readers to find “the story” (as though it did not reside in the ranks of words thus deleted)?

Reading Suzanne Jill Levine’s The Subversive Scribe, one finds this tidbit: “Baroque extravagance was suppressed officially in English in the late seventeenth century by the Royal Society.” Quoting a pronouncement from the Bishop Sprat (history is a record of felicitous conjunctions, isn’t it?), Levine reminds us that English not only values economy of expression (Sprat’s “primitive purity and shortness, when men deliver’d so many things almost in an equal number of words”), but positively prohibits its flaunting.

In defending Three Wogs from charges of bloviation advanced by one of Sprat’s modern counterparts, Theroux adduces “one balanced sentence inflated like a good balloon only up to the size of its identity—and no more.” That sentence: “The utter impossibility of alteration, determined through centuries of unquizzical resignation and fortified by a trust in the fancy of a capable God, makes of the grey day in London an inexorability that translates into the accepted gratitude of a traditional pain known to an untraditional pleasure not.” Theroux’s translation: “The English can’t change their rainy weather, and so they accept it,” which, aside from being superfluous as a thought, hardly has the sense of the first sentence, as a translation is hardly the original — traduttore, traditore.

Levine makes the connection explicit: “the superfluous” is at the heart of classical rhetoric. Terseness may be prized on the television screen, but only because its (inane) arguments are made mostly without words (words which are, inevitably, wrong) — the difference between “Hang in there!” and

We do not wish this kitty longiloquent (it has omitted the “baby,” obeying Bishop Sprat); by the same token, presented with a living, breathing human being, we rarely wish for a dissertation. “Get to the point,” we say, sharpening our eyes on body language and setting, tone of voice, “micro-expressions,” etc., all of us Holmeses of confabulation. But presented with only the printed word, don’t we need some superfluity? When words are all one has, doesn’t one need a few “extra”? [Is this why the literary reading is so often a cause for toe-tapping, watch-checking? Don’t we so often feel that we’d much rather be reading the words being doled out than hear them? It is only when there is an element of performance– value added– that we can focus, enjoy, listen.] And so, though Theroux would undoubtedly disagree, I say that “one balanced sentence inflated… only up to the size of its identity” is the soul of concision. The superfluous is not always superfluous. Sometimes it is strictly as the crow flies — the shortest distance between two points. Anything less wouldn’t get us all the way there. 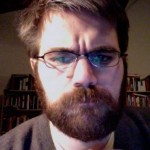 Gabriel Blackwell is the author of Madeleine E., The Natural Dissolution of Fleeting-Improvised Men, Critique of Pure Reason, and Shadow Man: A Biography of Lewis Miles Archer.

11 thoughts on “Acquiring the Superfluous”