I was on the Internet when I first saw the cover of Mark Leidner’s new book, “Beauty Was the Case that They Gave Me”.  I can’t remember what site I was looking at when I saw it, but I stopped for a minute, my hand on the mouse, which in turn was on the mousepad, which in turn was on the desk on which my computer resides. Two questions occurred to me, either at the same time or one right after the other (which made them seem to have occured at the same time).  They were: ‘Do I like this?’ and ‘Why has Mark done what he has done?’  Depicted was lower Manhattan, circa 1970, with the twin towers in the background – not fallen, but destined to fall.  And beside them, in mid-leap, a collage-style cutout of an NBA baller, made to appear as though he would imminently throw down a dunk at the unlikely height of those two very towers.

A book’s meaning is most acutely recognized when the book’s contents are considered beside its title.  The same applies, I think, to a cover.  That is, if the cover art and the title of a book can work in tandem, they reveal something about each other that might not have been seen had they remained apart.  The title, “Beauty Was the Case that They Gave Me”, is unusual in that it doesn’t make immediate sense in conjunction with the image to which it applies.  That isn’t to say it isn’t a good title – I think it is – but rather that a moment or two must elapse before its strange logic begins to disclose itself.  What is meant by “Beauty Was the Case”, let alone “Beauty Was the Case that They Gave Me”?  Who are the “They” that are doing the giving?  And what does the phrase mean when applied to a scene that came to be associated with so much pain?

There is a track by Snoop Dogg, on a record he made with Dr. Dre in the early 90s, called “Murder Was the Case“, in which Snoop, smooth and melodious as ever, intones, “Murder was the case that they gave me.”  This was the lyric that sprang to mind when I saw the title of Mark’s book.  Whether Mark himself was inspired by this line – changing it only slightly, but radically, to come up with his title – I don’t know.  But remembering this line gave me a way of thinking about his book, and its cover; a way of seeing what I think he is trying to do.

One of art’s virtues is that it allows us to re-imagine the world according to our own experiences or designs.  What Mark has done here is what we might call re-imagining.  Where there would be ‘Murder’, there is now ‘Beauty’.  Where there would be an act of terror, there is now an act of surreal grace.  Such work is bold, even dicey, as it uses humor to invoke a serious and public trauma.  But this only makes the fact that he has succeeded more impressive.  And he has succeeded, for, despite its whimsy, the cover ultimately reveals itself to be in earnest.  There’s something comic about the man with the ball, skying over the city, but as a gesture it’s gentle; it is a wish to put the towers to a different use, to give them a different end. 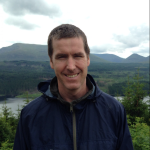 3 thoughts on “the world re-imagined, or a book cover as art, or what snoop dogg taught me about mark leidner”