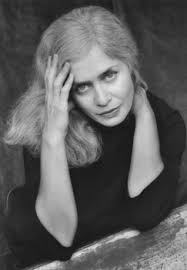 I’ve read about half of Hempel’s collected stories but none seem so seminal as this one. It’s one of her longer stories, 34 pages, and it hums along quite confidently after this wonderfully evocative and lyrical opening paragraph:

We did it twelve times–made love, all of us, to one another twelve times, the two of them doing everything two people could do to me twelve times. I was going to say only twelve times, but it wasn’t “only,” was it? It was wonderful.

The repetition, the recursion, the ‘was’s’, the’ twelve times’ three times, the sex–and the amount of it. It’s a gloriously mysterious opening. The narrator is telling an older man stories from her past, specifically details of this menage a trois. But how much truth is she including? Why does this man require this offertory from her? Hempel’s meaning of ‘offertory’ is religious, literally, the Eucharistic offering of the bread and wine to God during religious services before they are consecrated. The older man’s reliance on her stories and specifically to be told and not shown, is a rite, it’s all that’s left to him who was occupied by “seeing how far a person could go in the realization of pleasure, without leaving home, two people in a bed.”

The narrator drives to a cottage by a lake she is renting every night she leaves him. She spends the day there, then comes back into the city at night. This bifurcated existence can only go on so long. She delivers the stories before and after sex that melts her, but it is only a matter of time before she wises up:

On the night his best friend died, he said, “Stay with me.”
It was almost morning and we had not slept and had not let go of each other all those hours, and he said quietly, “Stay with me.”
I said, “You know I will.”
He said, “You know what I mean.”
I did know. He meant not all the time, but for all time. He meant despite everything he would do that would make me want to leave.
I said, “I know what you mean, and you know I will.”

Again the repetitions. But also lies. Nobody ‘knows’ anything, but they each say they do. Nobody ever stays.

While reading this yesterday I had a thought that the sentences of the story (and all of Hempel and many Lishites) anticipate the story itself. The music of the sentences and the dialogue (“Then let us go and consecrate the desecrated ground”) stand alone as music and for a moment the story can be put on hold–each sentence, all alone, is the story. The reader already holds the story–Hempel’s offertory–but the reader can also fully hug each sentence first before letting go–Hempel’s second offertory.

Of course, Gary Lutz actually defines the effect of sentences and how they do what they do in The Sentence is a Lonely Place lecture. But there is a reason why one can keep reading these stories again and again. The sentences, located in an echo chamber, call out again and again. The ear likes repetition. The ear can be contented while the mind swims on. Later, the ear will want more lyric.

Sun Ra on Music, Freedom, the Impossible, and More

Thomas Pynchon on History, Truth, “Living Inside the System,” Death, and More.